AGARTHA - INNER EARTH - KEY
HELPS TO CONNECT YOU WITH THE AGARTHIANS 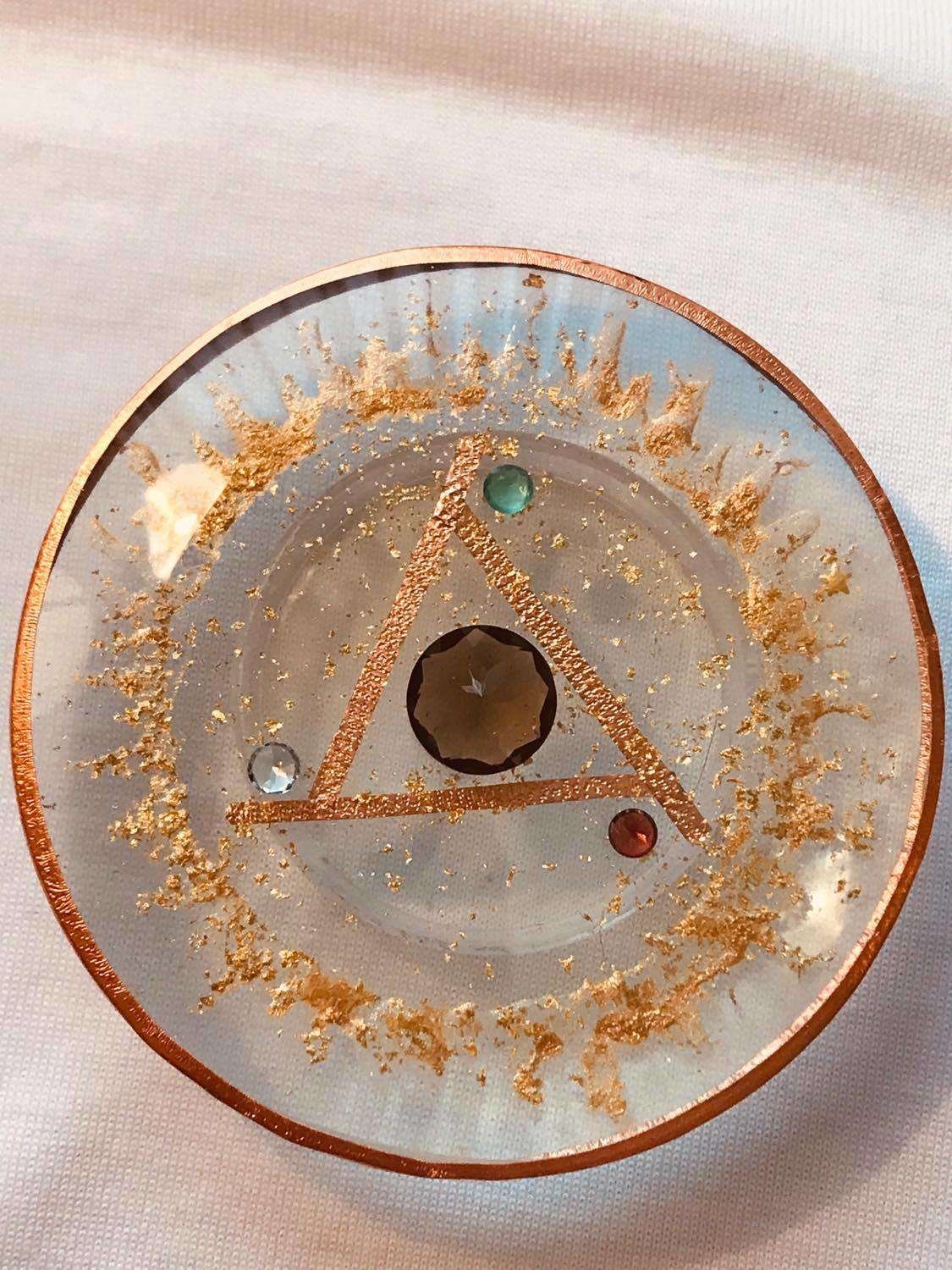 This Agarthian Key helps to connect with Agartha and the Agarthians.
This disc was channeled through from Adama in the Agartha and has been created specifically to assist those who are to work with Agarthians in helping with the ascension.

The disc is made to Adama's specification and includes 24K GOLD, The Agartha FREE WILL symbol and 4 genuine gemstones.

This disc is meant for those who wish to have a better connection with the Agartha and are here to work along side Agarthians in bringing the FREE WILL back to all of humanity.

Right now is a pivotal time in the history of earth and Agarthians are asking all who feel the pull to connect with them to do so without delay, as your assistance is greatly needed. 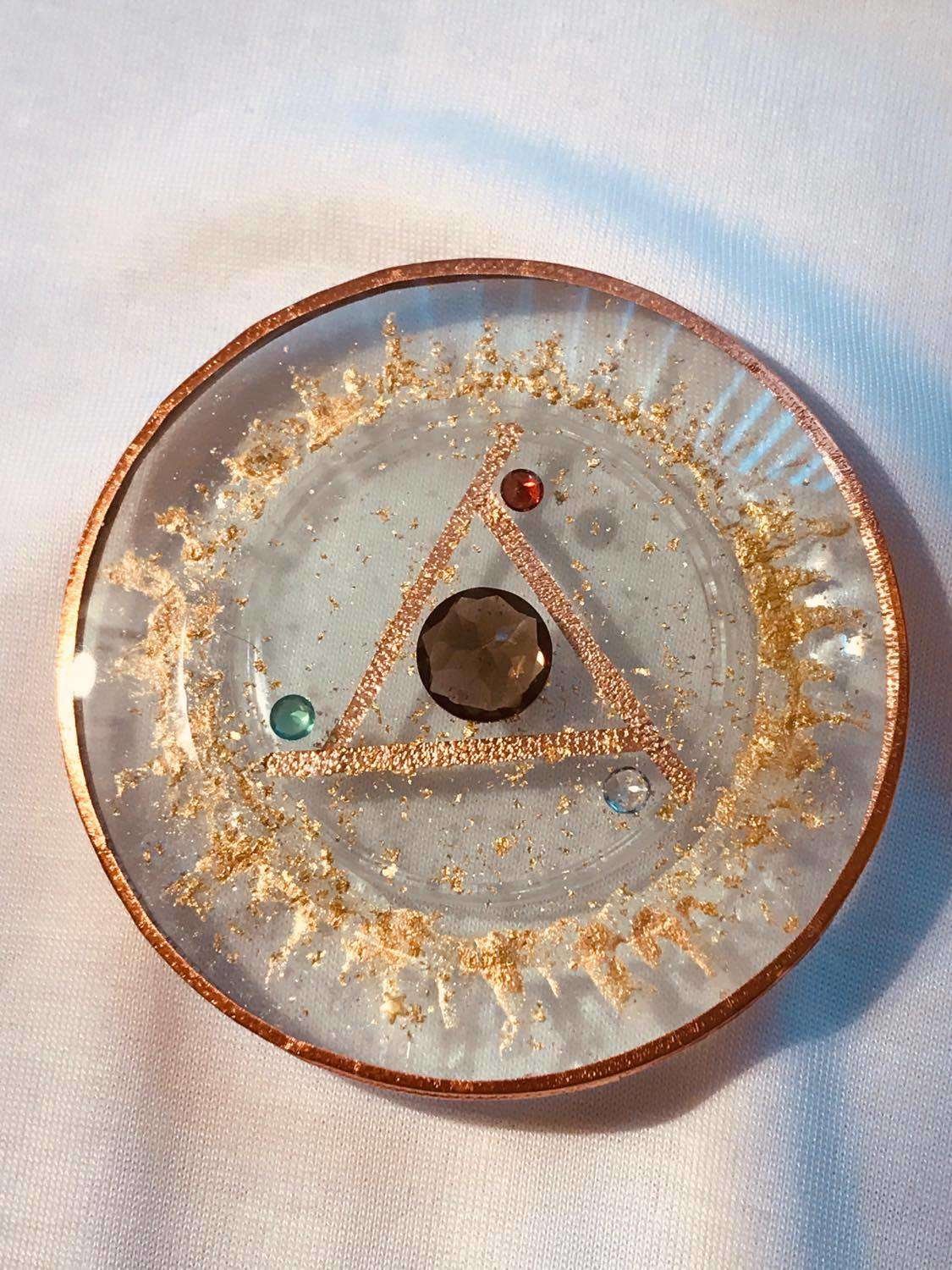 Gold symbolises the purity of the spiritual aspect of "All That Is". It is symbolic of spirituality and development in the realm of complete understanding, allowing one to both attain and maintain communion with the source of all being.

Gold is said to increase the healing powers of stones when they are set in jewelry. They are known to create powerful amulets by attracting and maintaining the qualities that are inherent in the stone.

The energy of gold can be used to balance the energy fields and to assist one in the elimination of ego conflicts and feelings of futility. It can also help to assuage the overburden of responsibility, to combat feelings of depression and inferiority, to allow one to both understand and to dispense with self-reproach, and to cal excitation and states of anger.

Gold has been used in the development, purification, and balancing of the heart chakra anf for the amplification of thought-forms. The purity of gold is said to help one to preserve higher thought forms for later retrieval.

Gold has also been used to open and to activate the third-eye and crown chakras. It has been said to attract honours, wealth, and happiness; to provide composure, to stabilise the emotional system, to alleviate tension and stress, and to amplify positive feelings. It also assists one in attuning to nature and its healing forces.

It can clear negativity from the chakras and the energy fields of the physical, emotional, intellectual, and spiritual bodies, while transferring the vitality of any companion mineral to the affected area. Gold produces an energy which is both cooperative and receptive, allowing for extensive use with other gemstones; it is capable of attracting and maintaining those qualities which are inherent within the additional stone. When in proximity to another mineral, gold provides a stabilising influence to the energies of that mineral.

Gold has been used to enhance mental faculties, to rebuild the nervous system (eg, in the treatment of multiple sclerosis), to improve digestion, circulation and breathing, and to increase warmth. It can also be used for the treatment of arthritis, skin cancer, blood disorders, pneumonia, vascular diseases, heart disease, eye problems, paralysis, rheumatism, skin disorders, tuberculosis, nightmares, and spinal problems.

Gold assists in the rejuvenation of the endocrine system, in the absorption of vitamins and minerals, and in the regeneration of tissue and the skeletal structure. It balances the right and left brain, and treats conditions associated with autism, dyslexia, epilepsy, and physical coordination.
Metaphysical Properties of Cooper

Quartz amplifies thoughts, which are a form of energy, and they store information, quartz crystals are easy to program with thoughts and firm intentions. Just like a computer that stores information, Clear Quartz can stores your thoughts and intentions, and amplify them. Clear quartz acts as a receiver and transmitter, allowing you to attune to the energies your intentions.
Home > Products > AGARTHA - INNER EARTH - KEY - HELPS TO CONNECT YOU TO AGARTHA