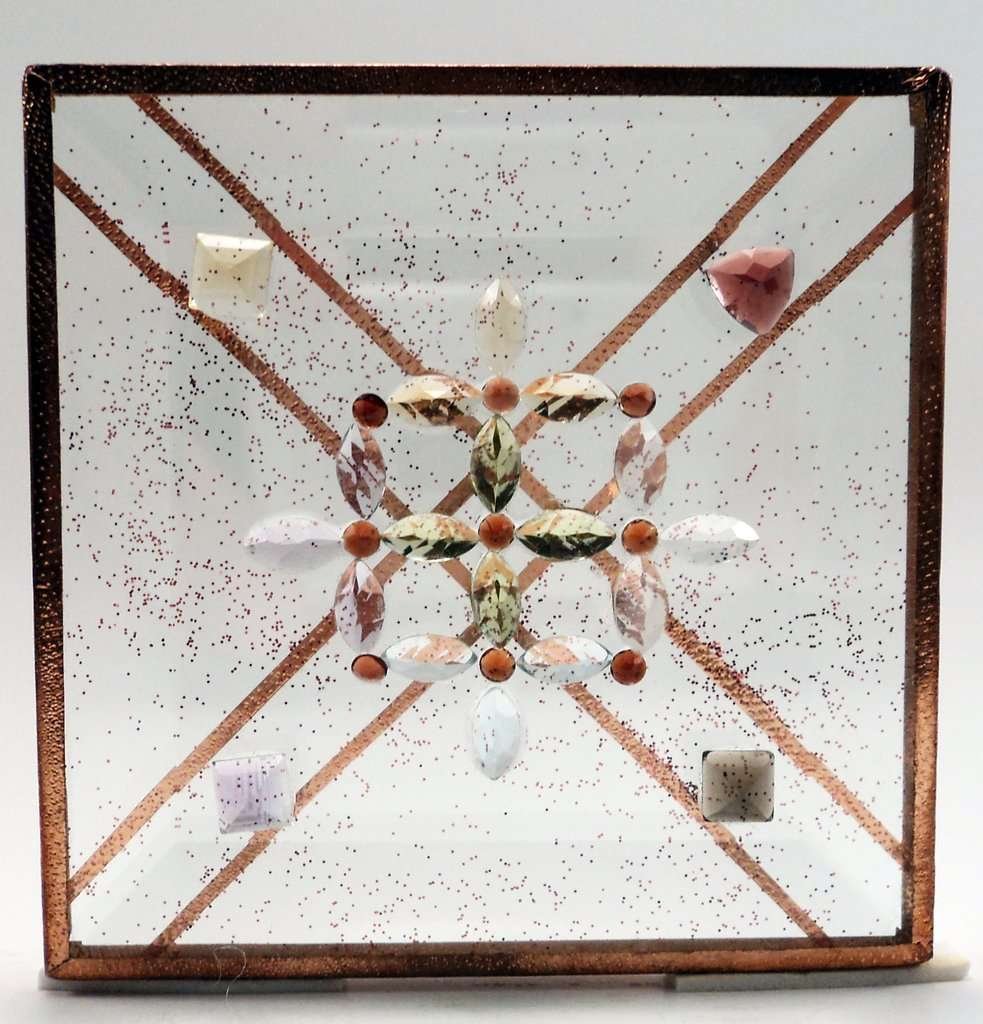 Lady Gaia came to me and guided me to create this very powerful and unique Device that helps you to attune to the NEW earth healing energy fields, balance and heal your energy system, chakras and assist you in utilizing the new energies of a newly constructed earth matrix.

GAIA is shifting her vibrations along with all of us, or rather we are shifting our vibrations along with her, and this means that a lot is changing, the energies are changing and we need to attune to new energies. This is what this tool can assist you in doing to attune you to new earth energies and to help you understand how to use them for healing and purification.

GAIA SOPHIA Disc is made with Genuine Crystals:
It measures 3 inches x 3 inches. It is made of specialized quartz glass, cut to reflect the light in such a way as to amplify the power of the cosmic energies. 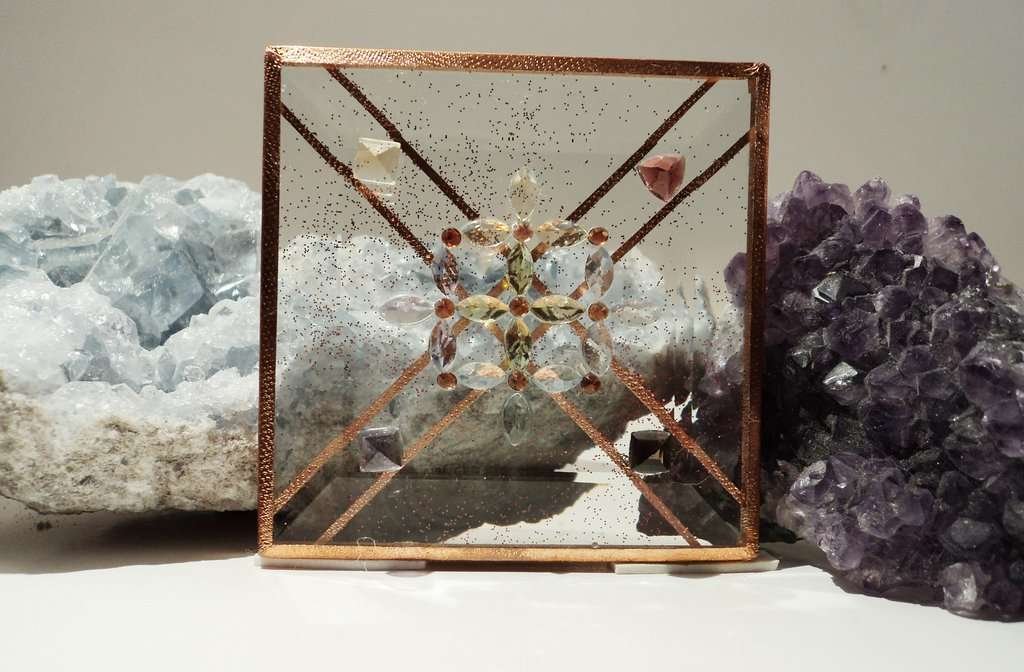 A guide on how to use it and the meaning of all the ingredients will be included with your order. Gaia Sophia Disc is securely packaged and beautifully wrapped. It comes with a special pouch for you to carry your disc in. Please note that you cannot wear this disc. You can carry it in your pocket, purse, hand, but it is not designed to be worn on your body.

Please note that since I put each and every single disc by hand and imprint them with energies it takes me roughly 2 weeks to make each one, along with the shipping please allow 2 - 3 weeks for delivery. Thank you :) 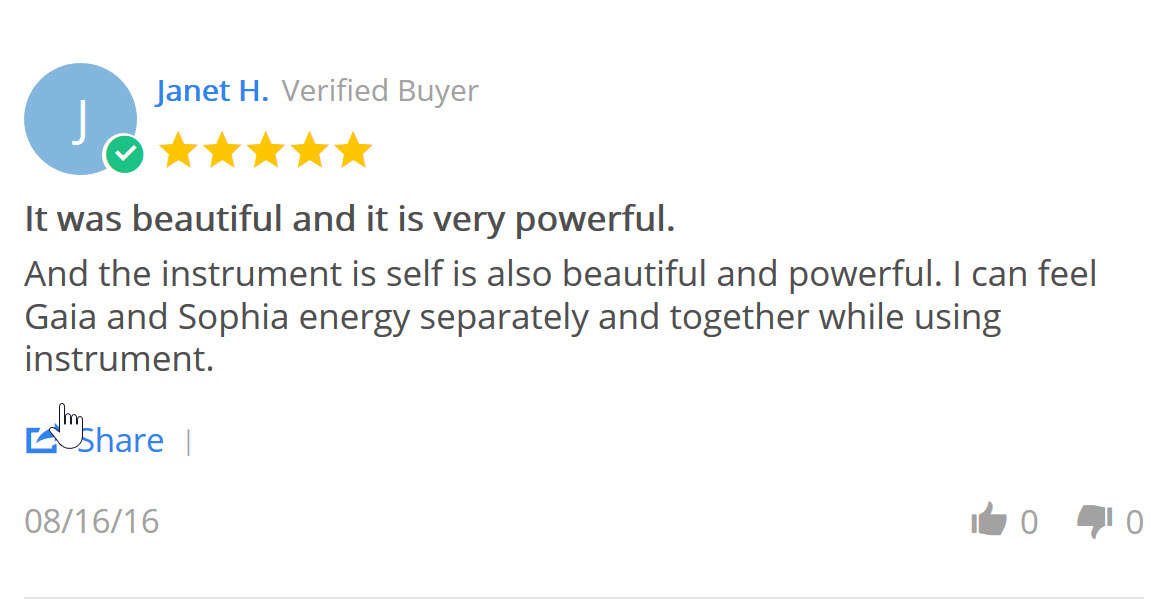 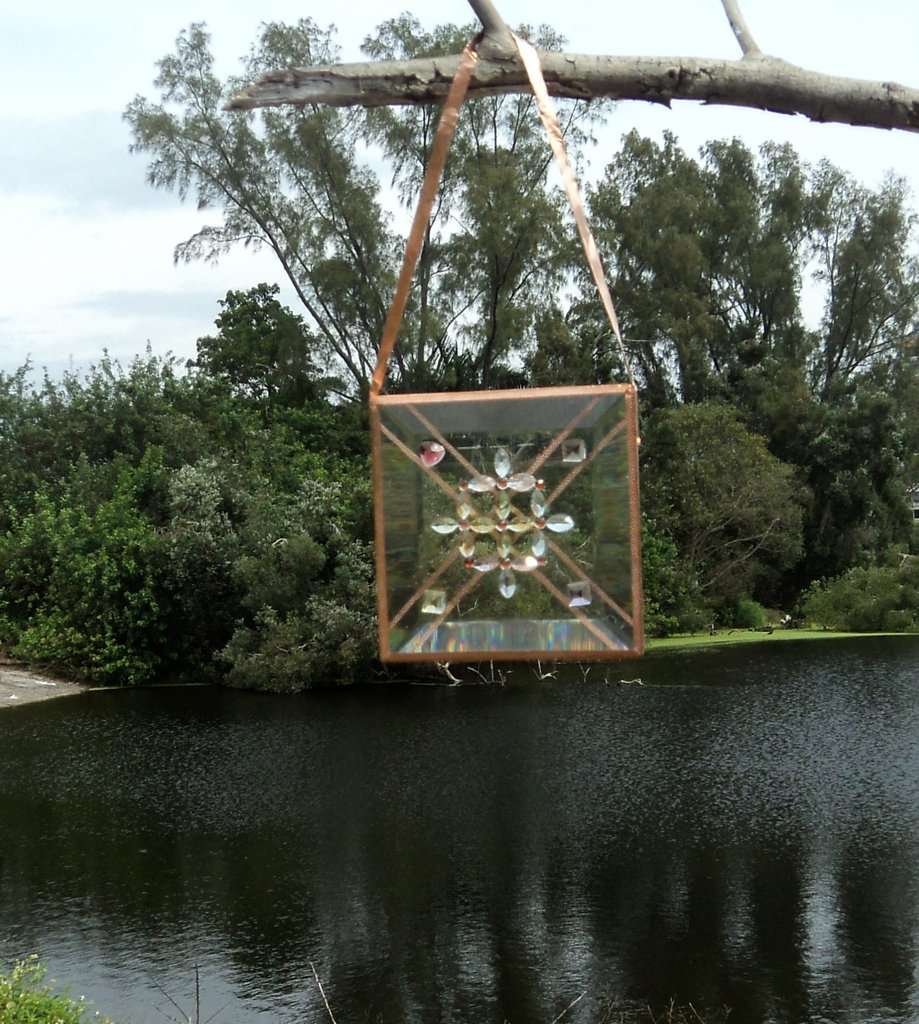 Everything in the Universe is energy and many things can be changed with energy. Every person, every thought, every emotion is energy. Our energy fields and systems are alive and intelligent.
The auras, chakras and energy systems of anyone can become blocked, distorted, clogged up, and torn. Magnetic connections in auras, chakras and energy systems, such as the meridian system can become broken and damaged. Energy healing can affect the energetic, physical, emotional, spiritual and intellectual aspects of a person.
Especially now when we are moving into a completely new energy matrix, our bodies need to adjust to the new frequencies, many are feeling incredibly ungrounded, because they have disconnected from the old matrix, but are having a difficult time connecting the new one. This is where this tool comes in, infused with the energies of a new earth matrix directly from mother Gaia’s heart, this incredible tool will assist you in finding your way in the new and ever evolving world of unfamiliar vibrations and frequencies of light. This is a monumental time which we have been waiting for, for a very long time, and GAIA invites you to join her on a new earth matrix where she is waiting for you with open arms and open heart so that you can continue traveling on these waves of ascension into a beautiful new world. 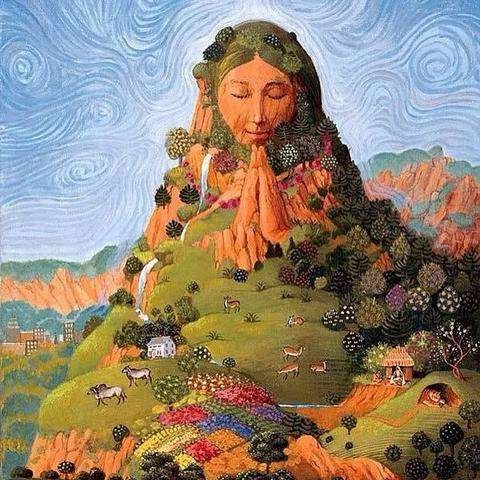 There is a lot of information available online that describe GAIA Sophia. But the following article written by Robert Kopecky from http://www.gaia.com/article/worlds-soul-woman-gnostic-myth-sophia caught my eye and I would like to share it here with you today.

THE WORLD'S SOUL IS A WOMAN - THE GNOSTIC MYTH OF SOPHIA Have you ever heard of Gnosis? Or of the Gnostics of old, often associated with early Christianity? I know you've heard of Mother Earth – since we're all riding around on her all of the time – or of Mother Nature, whom we all love to visit on holidays. We tend to bring her all of our problems, and she can always make them go away, for a little while. So why is it that we have this understanding of the benevolent feminine nature of the world, but we don't seem to let it shape our reality the way it could? Is it that we simply don't know any better? I don't think so. I think we've always known better. Long ago (and even today), people knew better, and the knowledge they had (and have) was a kind of "secret knowledge," called Gnosis, from the Greek 'to know.'

Although it's often conflated with early Christianity, Gnosticism isn't a religion, but rather a way of being in the world – a path to self-realization and integration with a more profound sense of reality.

As usual, back in the old days, an understanding that couldn't be directly expressed intellectually was passed along in the form of a myth, a story that communicates the "secret knowledge" that can only be understood through an experience of the heart, not the head; and the heart is quite literally where The Feminine Divine enters in.
THE MYTH OF THE DIVINE SOPHIA

In the Gnostic myth of how the world works, Sophia, the feminine personification of wisdom, lives happily with spirits of light (especially her twin brother), in the unified limitless potential of her Father's radiance, created by the twin powers of Depth and Silence.
She's so dizzy with love for the Creative Source that when she sees a brilliant shimmering light below, she flings herself down into the darkness, mistakenly following what she believes to be her Father's radiance, fooled by a mere reflection. There, in the abysmal unrealized potential of the world, she is trapped – separated from the light, the spiritual realization of Gnosis – the knowledge of transcendent unity.

But Sophia remains present, and in her resurgent power she brings great beauty and spiritual potential to the earthly realm and its inhabitants. Witnessing the irresponsible creation of the world by her errant offspring, Sophia conceals Consciousness in the body of
the demiurge’s first man, "Adam," and then brings it into the world as "Eve."There, the powers of the underworld have their way with her, using, abusing, and exploiting her, until all she knows is sadness in the struggle to return herself up to the light she has lost, but not forgotten. She gives birth to a bunch of bad boys, demigods called archons, including the worst of them all, the demiurgewho becomes the creator of this world, infecting it with pride, ignorance, fear, and his lust for power and pleasure.
Finally, Sophia breaks free and ascends back up to the true light of life, raising humanity with her ever so slightly. But she refuses to abandon the sad world of humans, and so she divides herself, keeping a part below, ever present and available for the enlightenment of all.

Here, we may call that Gaia – the consciousness of the world. Back up in the celestial realm of spiritual light, Sophia rediscovers Gnosis by joining her twin brother in a "marriage" of reunification, balancing the masculine ego of unrealized potential, and uniting it with the sacred feminine – made ever more powerful by adversity – into an androgynous whole. A complete person, full with the knowledge of the transcendent, unified light. 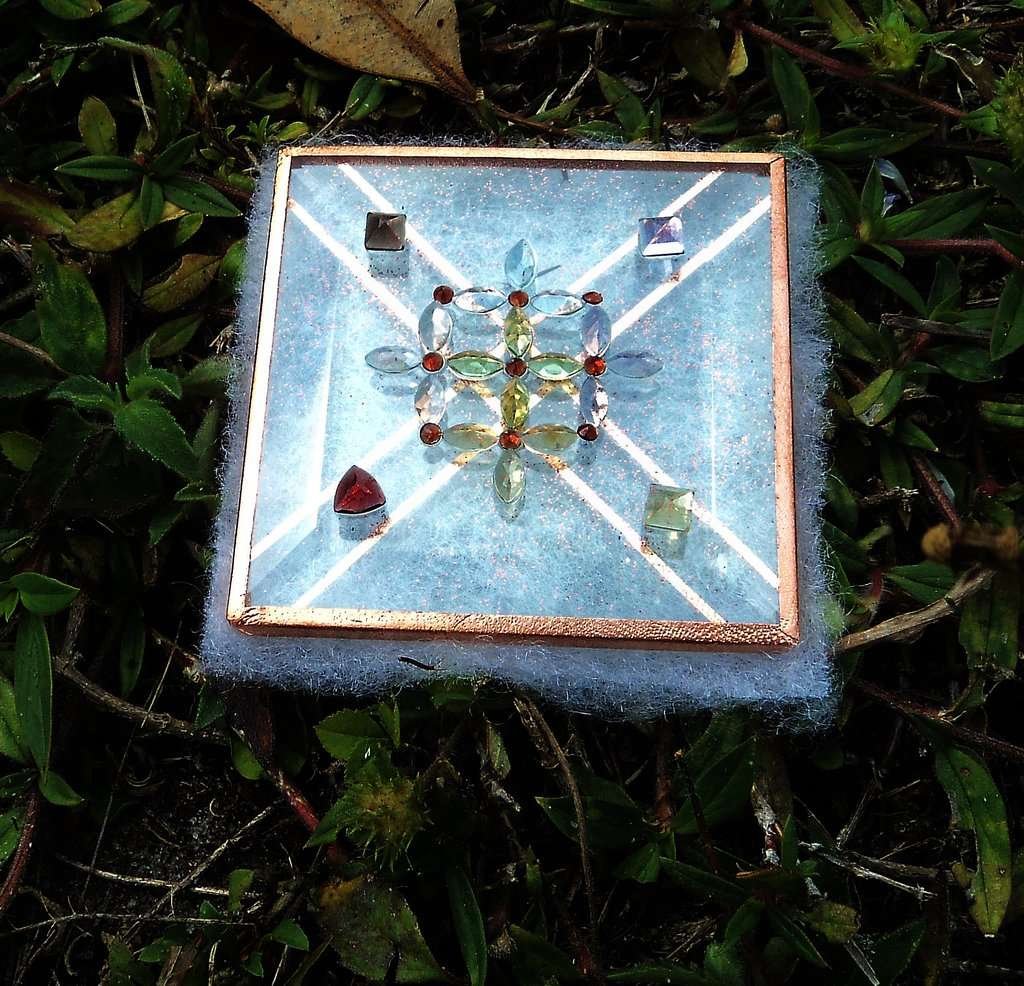 THE FEMININE HEART OF THE EARTH

This is the sublimely sophis-ticated philo-sophy of the myth of Sophia, a path that leads not only to self-realization, but also to an understanding of the feminine heart and soul of the earth.

ONE WOMAN, MANY NAMES

Sophia ends up being the giver of wisdom in so many forms: She is Shakti in Sanskrit, the powerful Hindu personification of feminine wisdom, and the personal and collective linking soul as atman, realized in the transcendent state of samadhi (Gnosis). She is the compassionate boddhisatva (Avalokiteshvara) in Buddhism, returning to light the path to nirvana (Gnosis); personified by the deity Guanyin. She is both Mother Mary, in her ascendant form, and Mary Magdalene, as the earthly companion of the Christ potential in Christian Gnosticism. In Jungian psychology, she is the unifying power ("individuation") of both the feminine and masculine archetypes, anima and animus, and of the lower self of the psyche with the higher spiritual self (Gnosis).
So you see, Sophia really gets around; or as my late uncle (by marriage), the great Jungian psychologist and philosopher, James Hillman put it: She is the Sophia of wisdom, the Maria of compassion, the Persephone of destruction, compelling Necessity and Fate, and the Muse.

As you can see our Mother Earth has a beautiful soul and continues to love us unconditionally despite all the horrific ways that we mistreat her physical vessel. She wants us to come with her. She wants us to move onto a new platform from which we too can reconnect with our own higher selves, grow, expand and become enlightened in our understanding of SELF. She invites us to come along on this beautiful journey of self discovery, offering all that she has in order to assure our safety, wellbeing and peaceful coexistence.

And so, she offers us this healing tool imprinted with her loving energies to assist us, purify all that doesn’t belong in a new reality that we continue to build daily with our thoughts, and ground us into this beautiful new world. This tools comes directly from her heart to yours, to assist you in cleansing, balancing, normalizing and healing your energy fields, all the way gently ushering you to move away from the old matrix and join her on a new path to freedom, unconditional understanding and love for all that is.
Home > Ascension Tools > GAIA SOFIA - Attunement to NEW Earth Energies, Grounding, Balance, Equilibrium